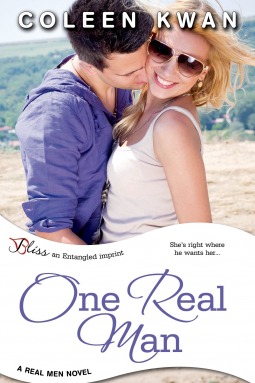 Amidst an ugly divorce and an even uglier scandal, Paige Kerrigan has returned to her parents’ estate to hide out until things blow over. While she’s enjoying a late-night naked swim, however, she’s shocked to find Owen Bellamy— her family’s former cute pool boy—standing poolside. Now he’s all hot, grown up, and renting the Kerrigan property…and he’s definitely not forgiven Paige for how she used to treat him.

Once, the beautiful but spoiled Paige Kerrigan was everything Owen wanted. Now she’s broke and Owen finally has his revenge…by offering her a place to stay as his housekeeper. Yet Paige isn’t the person he remembers. Instead, she’s far more than he imagined, and far more irresistible than is safe. But the last thing Owen can afford is to give his heart to the same woman who once broke it.

Did I like the book? Yes. Did I love the book? No, but I do think I pinpointed the reason why, which I will mention later.

Like all Entangled Bliss books, One Real Man was a very in a very sweet contemporary romance. There was very little drama, which I love about Bliss book! The drama was also solved very quickly. This was also a very easy read, it goes by every quickly and can be read in a night with ease.

This was also a second chance, which again I enjoy reading. Both main characters, Owen and Paige, had an extremely hard time letting go of what happened to them in the past or how they were preceded each other in the past. For some reason I could not connect to Paige, she bothered me a whole lot and I think that is why I didn’t love the book.

I also enjoyed seeing the connection Paige made to with how Owen’s sister was acting. I think that was a major turning point for both Paige and for Owen when he found out what Paige did.