We’re celebrating the release of LOVE SO UNEXPECTED this week! Have you ordered your copy? 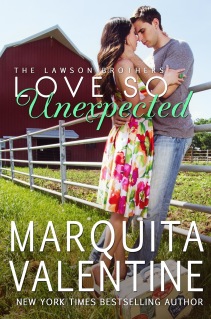 Widower Caleb Lawson has resigned himself to a life of farming and family functions. He never expects to find another love like he had with his wife, much less remarry. But once his mother brings home Sofia Nogales to help her get back on her feet, he starts to reconsider his expectations. Sofia is beautiful, witty, and so full of life that his arms ache to hold her.Determined to make a new life for herself, former head chef Sofia Nogales hopped on the first bus to the east coast and refused to look back. However, she never dreamed a series of bad events would have her end up in Jessamine, North Carolina as the guest of Dinah Lawson. Nor did she ever dream of meeting someone like Dinah’s son Caleb—the sexy farmer, who keeps everything to himself… except the heated look in his eyes.

But when the opportunity comes knocking—to the tune of cooking at an already established and popular restaurant two states away, will Caleb be able to convince her to stay?

Love So Unexpected is the sixth book in the Lawson Brothers Series and just like the rest of the brothers Caleb is a catch. Caleb’s wife passed away years ago and he hasn’t found someone else who he cares for as much as he did his wife. That is until Sofie comes long, Sofie is a chef and wants to start new at her friend’s restaurant. Instead of waiting Sofie decides to go to her friend’s restaurant. Little did Sofie know was her trip would be as smooth as she would hope. That’s when she ends up with the Lawsons.

For some reason I thought Caleb was going to be grouchy like his brother Mason, but that was not the case at all. He was just the sweetest and Sofie was instantly drawn to him. This is the first time Caleb has been drawn to someone since his wife passed away. Their relationship developed quickly, but that doesn’t stop readers from feeling their chemistry.

If you have read any of the previous Lawson Brother book, then this one is a must. It was a fun quick read that readers will fall in love with! 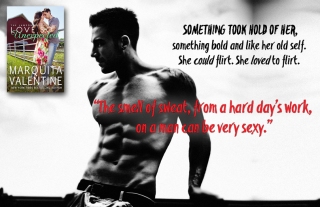 Marquita Valentine is the New York Times and USA Today Bestselling Author of the Holland Springs and Boys of the South series.Since first taking the plunge in July of 2012 to self publish, Marquita Valentine has sold over a quarter of a million books around the world. She’s appeared on the Top 100 Bestselling Ebooks Lists on iBooks, Amazon Kindle, and Barnes&Noble. She’s been called “one of the best new voices in romance” (Guilty Pleasures Book Reviews) and her books have been accused of being “a sexy, fun, and slightly addicting contemporary read” (The Book Queen).

When she’s not writing sexy heroes who adore their sassy heroines, she enjoys shopping, reading, and spending time with her family and friends. Married to her high school sweetheart, Marquita lives in a seriously small town in the south with her husband, two kids, and a dog.