BOOK SUMMARY:
The author of Flirting with Scandal presents her second book in a sexy contemporary romance series about three sisters in a powerful political family, the scandals that threaten to destroy them, and the passion that drives them…
The daughter of one of the Senate’s most powerful figures, Blair Reynolds was ready to become the ultimate political wife—until she caught her fiancé cheating on her wedding day. Law school is a fresh start, her shot at putting the pieces of her life back together. That’s the plan, at least. Until trouble comes in the form of her Torts professor, the man whose arrogance infuriates her in class but haunts her private fantasies.

Graydon Canter had a fortune and a place on all the hottest “Thirty under Thirty” lists, until a series of personal missteps nearly destroyed his career. A year teaching at a D.C. law school is just the break he needs to get his life back in order, as long as nothing—and no one—trips him up.

When Blair and Gray are forced to work together, their explosive attraction becomes impossible to resist. But Gray’s demons have drawn him dangerously close to the edge, and Blair has spent her life playing by the rules. Will she break them for a shot at love?

I really enjoyed reading Playing with Trouble. Lately, I haven’t been finding too many books that I enjoyed read. This story however mad me feel things haven’t felt in a while. This was also the first teacher/student romance that I have read. So, not only was it enjoyable, but it was also new.

The characters, Gray and Blair, were just as enjoyable as the plot! I completely felt their chemistry through the whole story, and I kept rooting for them. I also like how both characters grew so much. They both went on a journey and together they figured out what was to become of them. 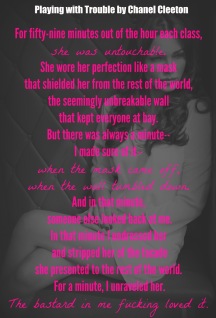 Flirting with Scandal by Chanel Cleeton

SYNOPSIS:
The author of I See London sets her sights on Washington, D. C., with a sexy new series about three sisters, the secrets they keep, and a powerful blog with a knack for exposing scandals…
Jackie Gardner knows all about dirty little secrets. The illegitimate daughter of one of the most influential senators in Washington, D.C., she grew up surrounded by the scandals and shadows of politics. Now that she’s landed an internship with a powerful political consulting firm, she’s determined to launch her career and take this city by storm.
William Andrew Clayton was born for politics. He knows the drill: work hard, play discreetly, and at all costs, avoid scandal. At twenty-six, his campaign for the Virginia State Senate is the first step to cementing his future. It’s time for him to settle down, to find the perfect political spouse. He needs a Jackie Kennedy, not a Marilyn…
When Jackie meets Will in the bar of the Hay-Adams Hotel, sparks fly. But the last thing Will needs is to be caught in a compromising position, and an affair with a political candidate could cost Jackie her career. When what began as one steamy night, becomes a passion neither one of them can walk way from, they must decide if what they have is really love, or just another dirty little secret…
PURCHASE LINKS:
Amazon: http://amzn.to/1A2JIWE
Barnes & Noble: http://bit.ly/1Gpcx70
Books-A-Million: http://bit.ly/1NnvmsY
Google Play: http://bit.ly/1BMZn0M
iBooks: http://bit.ly/1H3a7Z5
Kobo: http://bit.ly/1zyy4sf
Penguin: http://bit.ly/1B9qXoh
Goodreads: https://www.goodreads.com/book/show/22535694-flirting-with-scandal
AUTHOR INFORMATION:

Originally a Florida girl, CHANEL CLEETON moved to London where she received a bachelor’s degree from Richmond, The American International University in London and a master’s degree from the London School of Economics and Political Science. Chanel fell in love with London and planned to stay there forever, until fate intervened on a Caribbean cruise and a fighter pilot with smooth dance moves swept her off her feet. Now, a happily ever after later, Chanel is living her next adventure.

Law school made Chanel realize she’d rather spend her days writing sexy stories than in a courtroom, and she hasn’t looked back since. An avid reader and hopeless romantic, she’s happiest curled up with a book. She has a weakness for handbags, her three pups, and her husband.

Chanel writes contemporary romances. She is published by Harlequin HQN, Penguin/InterMix, and Penguin/Berkley and is the author of the International School, Capital Confessions, and Wild Aces series.