1-click now and meet Nolan and Brooklyn! I hope his lip ring is going to drive you as crazy as it does Brooklyn. 😉 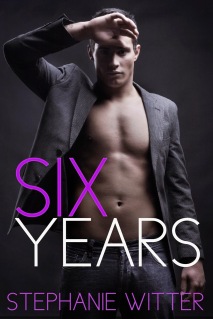 They hadn’t seen each other in six years.
She’d always had a crush on him.
He’d only ever seen her like a little sister.
And now…he’s back.
Brooklyn
I thought that he was a part of a distant past. I thought I didn’t feel anything for him now, but I was not so sure anymore. Having him back in my life, for however long it was, was making me see things differently. So many things had changed in the last six years and somehow I’d lost myself and forgotten all about my dreams.
My home life was still a mess, my personal life was nothing to boast about and when I see how successful he is, how everything he’d always wanted came true, I couldn’t help but feel lacking in a lot of ways. But he’s back and he needed me. I knew I was the only one who understood that part of his life, the only one he’s willing to share it with. My heart is still beating too hard and too fast for him and this time around, I was as much an adult as he was.
Having a six year age gap didn’t mean shit.
Nolan
Being back in Riverdale was harder than I thought. I’d turned my back on that life, but there had always been that one girl in my head. Little B. Now she’s nothing like the twelve year old girl I’d last seen. She’s a young woman, gorgeous and sexy. I couldn’t stay away. There’s something drawing me to her and it goes beyond my need to reconnect with her, to have her back in my life and fill the hollow part of my chest. But I couldn’t forget the little girl she had been; I shouldn’t forget the little girl she used to be.
Growing up with a junkie mother and nobody else, my neighbor, Brooklyn, had been my only happy place. I had taken care of her, and when I had left, I had to leave behind a huge part of me. I couldn’t do it again. I needed her. Once again, she’s the only person I want in my life, but I wasn’t sure if it was for all the right reasons.
Were there too many obstacles in the way?
Contemporary Romance standalone novel for readers over 18.

Short Excerpt:
“I won’t push you away.”
His Adam’s apple jumped once and a smile brightened his face. My eyes landed on his pierced lower lip and a wave of lust punched me low in my belly. I cleared my throat, feeling uncomfortable with the pictures my brain conjured.
He came closer, erasing the little space separating us. I could feel the washed away denim of his blue jeans and his firm thigh underneath against my bare leg. I wanted to close my eyes and revel in his presence, in the feel of his body against me, but I didn’t. I kept my eyes open as he leaned into me and wrapped his arms around me. The lean muscles in his arms flexed, his bare and hot skin brushing mine. I felt naked in my tank top as his bare arms were doing things to me I never thought possible.
“Relax, Brooklyn. It’s just me,” he said in my ear, his thin lips and loop tracing the words against the sensitive skin of my ear. I never realized before how an ear could be so erogenous. I couldn’t believe it. I was in Nolan’s arms six years after he left. He was here, in my bedroom.
I took a deep breath and the smell of his clean clothes and the scent that was only him, assaulted me. I was taken back to six years ago, before I had to face the loneliness that was my life. Before I lost my best friend. But right now, I wanted to stay in his arms without thinking about his departure or the future. I wrapped my arms around his narrow waist and balled his t-shirt in my fists.
He relaxed against me and ran a hand up and down my back, avoiding the small of my back that was bared by my tank top which had ridden up. “It feels different,” he said, pulling away. He nibbled on the loop in his lower lip.
I nodded and smiled weakly. Losing the heat and weight of his arms around me made me feel depressed. I missed that kind of attention, of touch. Mike and all the guys before him never hugged me just because they cared about me. If they hugged me it was with the purpose to have me naked minutes later and while I was all for it, it was also difficult when you had nobody to give you a real, warm hug. I’d forgotten what comfort felt like.
“It’s different. We’re both adults now.”

About the author:
Stephanie Witter is a French dreamer. She started learning English at three, and fell in love with the language. Always with a book, or two close by, she started reading in English when she couldn’t wait any longer for Harry Potter to be translated in French. After a while, reading wasn’t enough. She started writing Young Adult and New Adult Contemporary novels and PATCH UP is her first New Adult Contemporary novel.
* Website * Blog * Goodreads * Twitter * Facebook Page * Tsu * Instagram * Pinterest *