We’re celebrating the release of Aimee and the Heartthrob by Ophelia London! 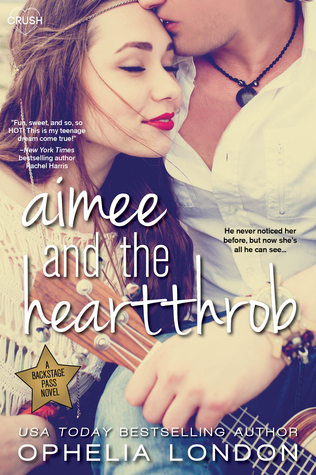 He never noticed her before, but now she’s all he can see…

Miles Carlisle is every teen girl’s fantasy. His rugged good looks and exotic British accent have helped catapult his boy band, Seconds to Juliet, to super-stardom. But after two disastrous and very public breakups, Miles isn’t interested in dating just any girl; he wants The One. And the only girl he’s interested in is not only his best friend’s little sister―and off-limits―but won’t even give him the time of day…

As a kid, Aimee Bingham had a huge thing for Miles…until he made fun of her for always tagging along. Now that she’s outgrown both him and her pigtails. the prospect of spending two weeks on tour with the childhood crush who broke her heart isn’t exactly enticing. Except now Miles seems interested. Very interested. And no matter how hard Aimee tries to resist him, her crush is definitely making a comeback.

I have enjoyed every single book that I have read by Ophelia London, and Aimee and the Heartthrob was no different. I tend to stay away from Rock Star romances, but there a few authors that I can not pass up reading one of their novels, and Ms. London is one of them.

Aimee has been sent to go one tour with the band Seconds to Juliet, since her brother is working as a roadie intern on tour. Who wouldn’t want to be on tour with such a famous band? But there is one massive problem with this, Miles, her ex crush, is in the band. Now she has to try to spend the next 3 weeks with the boy she hates.

Aimee was a very likable character, I think every teenage girl knows how it feels to have a crush on a boy, and get completely heartbroken. I think every girl at one time in her life she has been completely obsessed with a guy in a boy band. Everything that she did, I think I would have done too. I also really liked Miles and after everything was straightened out, I liked him even more!!

This novel was for a younger audience and I think that Ms. London did a great job writing a book that both young and older readers could enjoy. I also think it was pretty age appropriate for YA readers.

USA Today bestselling author Ophelia London was born and raised among the redwood trees in beautiful northern California. Once she was fully educated, she decided to settle in Florida, but her car broke down in Texas and she’s lived in Dallas ever since. A cupcake and treadmill aficionado (obviously those things are connected), she spends her time watching arthouse movies and impossibly trashy TV, while living vicariously through the characters in the books she writes.

Ophelia is the author of DEFINITELY, MAYBE IN LOVE; ABBY ROAD and CROSSING ABBY ROAD; the Perfect Kisses series including: FALLING FOR HER SOLDIER, PLAYING AT LOVE, SPEAKING OF LOVE, and MAKING WAVES; and the upcoming AIMEE AND THE HEARTTHROB for Entangled’s Teen Crush. Visit her at http://www.ophelialondon.com, but don’t call when The Vampire Diaries (or Dawson’s Creek) is on.