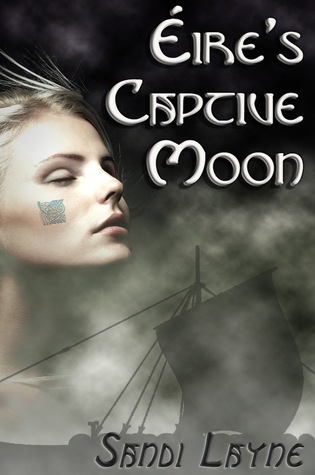 Éire’s Captive Moon, the first book of Sandi Layne’s Éire’s Viking Trilogy, brings you to the unsettled era of the early Viking raids along the coast of Éire – today’s Ireland.

A wounded refugee from the violent Viking raids on Éire’s coast is healed so well by Charis of Ragor that Agnarr captures the moon-pale woman for his own and takes her home to Nordweg to be his slave.

Also captured is Cowan, a warrior gifted with languages. He is drawn to the healer of Ragor and finds himself helpless before her. In more ways than one!

Through the winter, Charis plans a fitting vengenance upon her captor for the men he killed. She also prepares to return to Éire and the children she left behind.

But will her changing feelings interfere with these plans? When two men vie for her heart, will she give way before either – or both?

I was never into learning about history, let alone read about it. So, I have avoided historical fiction/romance. However, once I began reading Eire’s Captive Moon, I was immediately engrossed.

Charis’ world was turn around when her two husbands were killed and she was held prisoner. Little did she know that her captor would not only want her to be a healer for him and his people, but also a slave. The more Charis got to know her captor Angarr, the more she began to see that he wasn’t as bad as he seems. Then there is Crowan, someone from her land that was captured too. Together they learned to accept their faith, and kept each other sane.

I am not sure where I would classify this book, there was little romance in the book, but it was there a little. I am leaning toward that this book in more of a historical fiction.

Ms. Layne does an amazing job bringing her readers in the world of Viking. I learned so much through her details and painting vivid imagines of the setting and characters. I think that is very important in a book like this. It allows the reader to really become connected to the story altogether.

After reading this story, I can not wait to read the second book in the series to find out what happens to all my favorite characters!