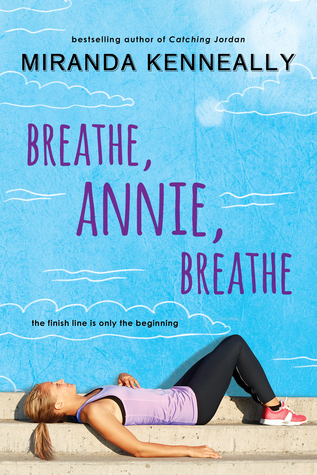 Annie hates running. No matter how far she jogs, she can’t escape the guilt that if she hadn’t broken up with Kyle, he might still be alive. So to honor his memory, she starts preparing for the marathon he intended to race.

But the training is even more grueling than Annie could have imagined. Despite her coaching, she’s at war with her body, her mind—and her heart. With every mile that athletic Jeremiah cheers her on, she grows more conflicted. She wants to run into his arms…and sprint in the opposite direction. For Annie, opening up to love again may be even more of a challenge than crossing the finish line.

Annie isn’t the most athletic girl in the world and running is definitely not her strong point. However since the passing of her boyfriend Kyle, she has decided to run in the marathon that he was never able to run in. After talking to the football coach at her school, she decides to join a training group. This is where she meets Jeremiah, and as much as she likes him, she is having a hard time letting go of her past love.

Annie’s story is an emotional one; she is on a heartfelt journey to overcome the challenge of a marathon and maybe opening up her heart again after she lost someone she loved.

Throughout the story there were many flashbacks and within the flashbacks, you learn what happened to Kyle and how Annie blames herself for his death. It takes a while for the reader to really see what happens, it might be more towards the middle of the book. The flashbacks were nice and they showed the love they had for each other. Although, a part of me second guesses some of their feeling after reading certain flashbacks, I don’t think somethings would have happened if they were truly in love with each other.

I thought Annie and Jeremiah were great for each other and their friendship was so sweet. He was willing to put his feelings aside in order to be there for Annie. The only thing I’m not sure about is Jeremiah and the fact that he is an adrenaline junkie.

Breathe, Annie, Breathe is part of the Hundred Oaks series, and I didn’t realize that. Even though you are able to read this one as a standalone, I now want to read the rest to find out more about the characters I briefly met in this story.