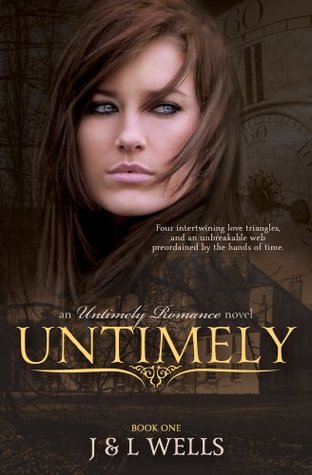 Heather Richardson is a seventeen-year-old British girl whose life quickly becomes an emotional roller coaster when she meets Ruben Brown, a twenty-year-old man who works for her father at Freesdon Manor. As much as Heather wants to love Ruben, the cracks in their relationship begin to show as her eighteenth birthday draws nigh. In a surprising turn of events Heather is confronted by Frank, an intriguing man from a past that dates back to the nineteenth century. His untimely presence changes everything. When she’s thrown back in time by an unrelenting force, Heather realizes that her life is not what it appears to be. Her future has already been written, and it seems she cannot escape her fate, a fate determined by a love lost long ago. In her struggle to find herself, Heather must chose her destiny amidst a dangerous love triangle, vengeful lovers, and passions controlled by the hands of time.

I first read J & L Wells’ writing when I read Disturbingly Beautiful, and that was my first time travel read. When I saw Untimely on Netgalley I knew I needed to read this story as well!

Heather Richardson is 17 and has never truly had much experience with boys, but then she meets Ruben, she is smitten! Right away she was telling her parents about her new boyfriend Ruben. I thought it was a bit odd that they went out one night and all of a sudden he was her boyfriend, but he also right away was sending her texts that said that he loved her. Then one day a boy from her past came into the picture, Frank, there’s something about him that Heather can’t shake. This is when Ruben begins to become possessive and in my opinion emotionally abusive. The more Heather learns about both Frank and Ruben the more she is confused, because she keeps see ghostly figures and has travel back in time.

Heather was a very naïve character and I don’t think she really knew what was going on in her relationship with Ruben. Ruben was someone I could not stand in the least bit! I think he was horrible to Heather and his relationship with Beth wasn’t too healthy either. I did enjoy Frank I wish he was in the book a bit more, but he kept going back to his time period, leaving Heather with Ruben.

I liked going back in time to the nineteenth century where customs and things were different, it was interesting to see both Frank and Heather adjusting each time they traveled in time.

I now need to get my hand on the next book in the series, Untimely Return!!!