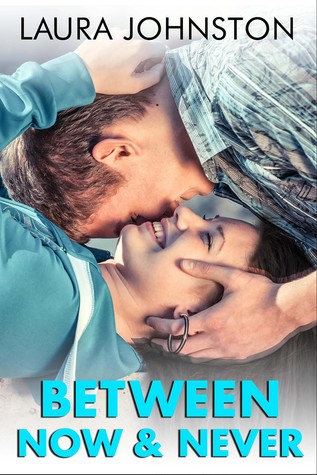 Title– Between Now and Never

My heart thrusts with a force that takes me by surprise. Telling me something I don’t understand. A splitting pain, a longing to slip back under. They tell me I was in a hit-and-run, but I can’t remember what happened that night. All I know is that I woke up with pictures in my pocket, a card from one of those photo booths in the mall. And I’m in the pictures. Cody Rush. Me and…Julianna.Her brother was there that night, and my dad, the FBI agent, was the one who put her mom behind bars. What’s the connection? And why won’t Julianna talk to me now? Somehow, she holds the key to it all, and getting close–real close—to her for the answers I need will be no hardship at all…

I enjoyed reading Rewind to You when it first came out and I was so happy when I saw that Laura Johnson has written another book! I could not wait to read it and I was not disappointed!

Julianna’s mom is in prison for mortgage fraud because she wanted to send Julianna’s brother, Vic, to rehab and they didn’t have the money. Cody’s dad was the arresting officer who put Julianna’s mom behind bars. When Cody finds himself in the middle of a drug deal gone bad with Vic, Cody ends up worse off than he would ever imagine.

I thought the romance in the novel was adorable! Cody was defiantly sweeter than Julianna thought him to be. As soon as she found out his last name was Rush she thought he was a spoiled rich kid, but instead he was a sweetheart. The photo booth scene was one of my favorites!!!

This book was also more than just a romance, it was about family too. We saw a lot of what Julianna’s family. We show how her family treated her and how her life changed now that her mom wasn’t around. I would have like to see more of Cody’s family, I felt as though they were a bit too prefect. The only thing that stood out was the loss of Cody’s brother, Jimmy, for which Cody blames himself for his death.

I think I would have liked more of a conclusion in the end, once this book ended and I still have more questions.

This was a great YA book that stayed true to the genre that I would recommend to teen readers!

One comment on “Read Me Fridays: Between Now and Never by Laura Johnston”