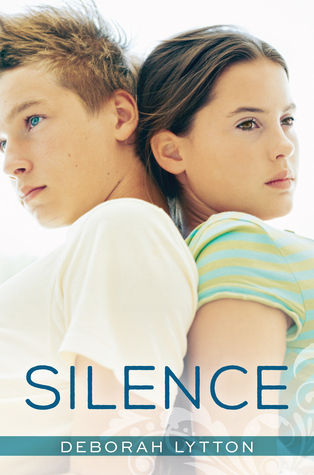 Stella was born to sing and her voice has given her the status of “cool kid” at school with everyone thinking she is destined for stardom on Broadway. When a freak accident renders her deaf she cannot hear or even speak, much less sing and is trapped in a strange new world of total silence. She meets Hayden, a lonely outcast with whom she can communicate with because his pronounced stutter makes him speak so agonizingly slowly but makes it easy for her to read his lips. Hayden reaches out to help Stella and a friendship grows to deep connection and an unexpected romance until his insecurities make him wonder if Stella will leave him if she ever regains her hearing and her challenges with her disability force her to create an entirely new life of meaning and purpose.

“Trust is synonymous with pain. And love is nothing more than a shiny wrapped present that turns out to be empty inside.”

Silence is a sweet young adult romance about two teens who taught each other about life and how to love. This book was written so well that I found myself completely lost within it. It was interesting that the story was about two people that have filled their world with silence that I found myself ignoring the world around me while reading.

I also found it to be nice to read a story where the two main characters have a disability. I happen to know a child that was in an accident and now he is both deaf and blind. It is interesting to see the struggles that Stella went through when she first became deaf and seeing the similarities and differences with the child I know. It is a disability that you do not see often in books. I also like that the author had a character that shuddered, I think this is very common, and again I have never ran into a character that had a speech problem like that.

Since Stella is already in high school she is so use to relying on her hearing that life became a bit hard for her. I adored her has a character as well, there didn’t seem to be any unlikable qualities about her. Even when she had everything she thought she wanted, she didn’t seem to have a big head about it. Her friend Lily on the other hand, was the opposite, and I was not a fan of her! Hayden is another very likable character, in the beginning he really wanted to help Stella see the world in a different way. I love that as Hayden was helping Stella she was helping him too.

This was also a very sweet and different from many stories in the young adult genre, I can also see some young readers also being able to read this as there are no inappropriate contact again that is a breath of fresh air!