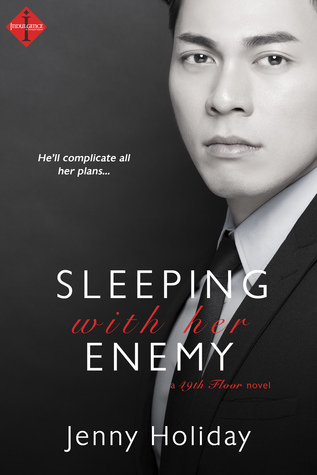 Title- Sleeping with her Enemy

He’ll complicate all her plans…

Amy Morrison is supposed to be at her wedding. But when her husband-to-be jilts her at the altar, a distraught Amy runs to the only place she feels safe—her office. Besides, everyone who works on her floor is at her wedding…except him. Dax Harris. Playboy, executive, and Amy’s official office enemy.

While he and Amy don’t see eye-to-eye on the best of days, Dax can’t help but feel badly when he sees Amy mid-meltdown. Next thing he knows, he’s gotten her good and drunk, and they’re making out like two  teenagers. And since neither of them want anything serious, why shouldn’t they be frenemies-with-benefits? Because there is no possible way they could ever fall for each other…

I liked this book so much!!! It took me no time to read and I just could not put the darn thing down! There was such great chemistry between Dex and Amy, I felt it from the first scene with them together. Their banter just added to the chemistry they had together, in a way I think the reason hated each other all this time was because they were attracted to each other and knew they couldn’t have each other.

Both characters were very strong and still were able to have growth by the end of the story. I also liked how Dax’s family treated Amy! They were characters all on their own!

I would defiantly recommend this to anyone who enjoys reading enemy to lovers story, you will not be disappointed!