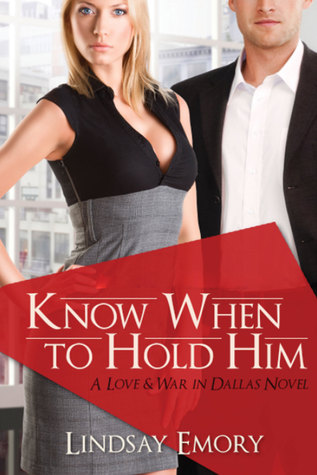 Title- Know When to Hold Him

Spencer Hightower’s job is cleaning up other people’s messes. And she is damn good at it. Unfortunately, being a supremely organized workaholic, she doesn’t always easily meet guys—until Liam Connelly shows up, all high-powered and really, really sexy. Sure, he makes Spencer’s pulse thump…but he’s also the biggest pain in her professional life. Liam can’t believe his lousy luck when he learns that Spencer is his opposition in a high-profile scandal. She’s the best at what she does and the worst possible opponent. Of course, a little professional animosity can’t hurt a guy’s chances for a date, can it? Even as Spencer tries to keep her distance, their attraction grows stronger…and hotter. But once they cross all kinds of professional—and personal—boundaries, the situation snowballs into a disaster that even the great Spencer Hightower can’t fix…

This year I have lucky enough to read so many 4/5 star book and Know When to Hold Him was no different. This was the first book that I have read by Lindsey Emory and I will be looking for more books by her in the future. The two things about this book that I want to talk about are the characters and the plot.

Both Liam and Spencer were strong characters, they knew what they wanted and would fight to get it, never backing down. I like how they challenged each other and in the end opening themselves up and let another person into their hearts. There was such competition between the two of them and they tried so hard not to start a relationship and when they did they tried not to let business get in the way of their personal relationship.

A lot of times I get tired when a book has a story like that revolve around sex scenes; instead I like a story that has a plot with a couple sex scenes inside. I feel as though a plot makes a story and that’s what this book has, a plot. Don’t get me wrong there are times where that the exact book I am looking for, but not always. I also was completely shocked at something that had happened; I was expecting the book to go another way. It’s always wonderful to read a story and not know exactly what is going to happen next.