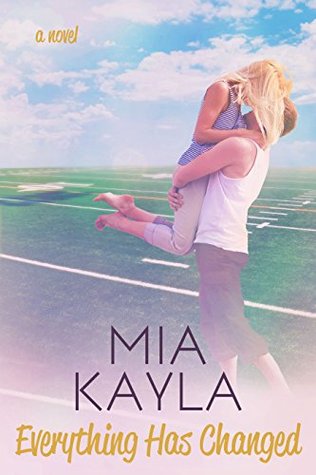 Title- Everything has Changed

Imagine finding the love of your life at the age of six.

Bliss has known Jimmy Brason since first grade. He took on the role of the big brother Bliss never had, breaking Bliss out of her shy shell, encouraging her to have fun in high school, and pushing her to live her life to the fullest. They have always been friends—until one day, Bliss wanted more. Now seeing women everywhere swooning over Jimmy, head quarterback of the New York Cougars, is enough to drive her to madness.

Jimmy has been in love with Bliss forever, but she doesn’t know and she can never find out. In all the craziness of his fast track to fame and money, Bliss is the one person who has kept him sane. He firmly believes that history repeats itself and with his tainted past, he’s afraid that he’s fated to hurt her if he allows himself to follow his heart.

Bliss has watched Jimmy grow from a boy into a man, and it’s not fair that someone else will get to keep him when she knows in her heart that he only belongs to her.

When they tiptoe on the edge of love, can their friendship remain intact with both of them ignoring the rumblings that’s threatening to explode?

Everything Has Changed is a story of love, loss, and longing for the one you grew up loving.

“‘Bliss,’ he whispered, ‘is defined as a state of perfect happiness… You’ve made this man the happiest man alive.'”

I like that there were flashbacks with in the store, I think it connected me more to the characters and the emotions that Bliss felt for Jimmy. I understood her feeling from the very beginning, but I couldn’t really feel what Jimmy was feeling. He seemed very hot and cold with her and I wanted to know why he was tutoring himself the way he was. I might have like this book to have a duel POV so I could truly see what he was actually feeling. I do feel like they had such an amazing connection. I love that Jimmy called Bliss every morning at 8 for a daily call and if she needed him or he was worried about her, he would make sure he was there for her (He just had to jump on a plane each time).

Of course when you like a book there are always things that you don’t like, and the one thing I didn’t like was all the relationships that Jimmy had with other women when he was so in love with Bliss. We only see it with one character, but it is hinted that there have been more girls than just her. Everyone even referred to her as “Jimmy’s girl” but he had all these other women that they all knew about, in a way it made me believe that he wasn’t as in love with her as I thought. Which a duel POV would have helped me figure out 😉

This is the first book where I didn’t get an epilogue, those are always my favorite. I would have liked to see where they ended up, to see if what happened in the end was true.

This book wasn’t just about two people in love but about friendship and family. I highly recommend this book to any new adult romance fans out there!