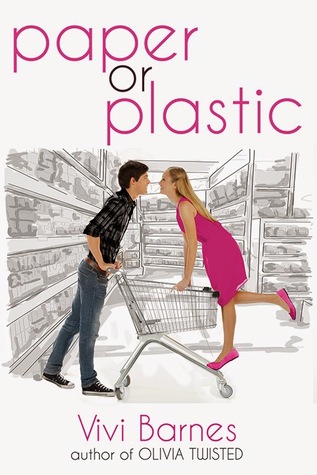 Busted. Alexis Dubois just got caught shoplifting a cheap tube of lipstick at the local SmartMart. She doesn’t know what’s worse—disappointing her overbearing beauty-pageant-obsessed mother for the zillionth time…or her punishment. Because Lex is forced to spend her summer working at the store, where the only things stranger than the staff are the customers.

Now Lex is stuck in the bizarro world of big-box retail. Coupon cutters, jerk customers, and learning exactly what a “Code B” really is (ew). And for added awkwardness, her new supervisor is the totally cute—and adorably geeky—Noah Grayson. Trying to balance her out-of-control mother, her pitching position on the softball team, and her secret crush on the school geek makes for one crazy summer. But ultimately, could the worst job in the world be the best thing that ever happened to her?

What a great read!! Paper or plastic was a sweet story about Alexis, who was caught shoplifting and to pay for her crimes she must work at the SmartMart. When Alexis starts working at the store she’s so negative! Not only about the situation but the people and store as well. Though out the book her view on everyone changes, the more she works with these people the more she likes them. Ruthie was too funny; she completely seemed to love life. Then there was Bessie, someone who was more like a grandmother to the employees. Last but not least there was Noah, a manager at the store, who also is her best friend’s arch enemy. He was a very hard working guy helping to support his family.

I thought the setting in the supermarket was quite interesting, I have read a book that was set in one yet and it was interesting to see who they came across, like the extreme coupon lady!

I like that the story between Noah and Alexis wasn’t love at first sight and they needed to work towards being together. There were cute little scenes between the two of them in the supermarket as well. I love how in the end Noah helped Alexis grow and mature along with him.

I would recommend this book for anyone who enjoys reading sweet YA books.