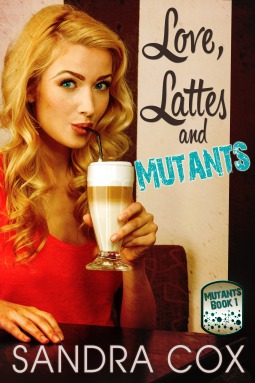 Finding love is hard, even when you aren’��t a mutant.
Like most seventeen-year-olds, Piper Dunn wants to blend in with the crowd. Having a blowhole is a definite handicap. A product of a lab-engineered mother with dolphin DNA, Piper spends her school days hiding her brilliant ocean-colored eyes and sea siren voice behind baggy clothing and ugly glasses. When Tyler, the new boy in school, zeroes in on her, ignoring every other girl vying for his attention, no one, including Piper, understands why…

Then Piper is captured on one of her secret missions rescuing endangered sea creatures and ends up in the same test center where her mother was engineered. There she discovers she isn’��t the only one of her kind. Joel is someone she doesn’��t have to hide from, and she finds herself drawn to the dolph-boy who shares her secrets. Talking to him is almost as easy as escaping from the lab. Deciding which boy has captured her heart is another story…

Love, Lattes and Mutants is a cute YA fantasy book about a girl named Piper who isn’t what she seems, instead she is a mutant. She doesn’t have any special powers, but she is part dolphin. She is able to stay underwater for about 20 minutes and she swims pretty quickly.

At first I couldn’t tell if Tyler truly liked her for herself or because he saw her without her “nerd” clothes. Then I read more and more and I truly liked them together. I also loved Gramps! He was too adorable and was always looking out for his granddaughter!

My biggest issue with this book was the pace of it all. I felt that were rushed in meeting the main character, but then the next 74% dragged on with them. I was waiting for the whole book to see what happens when Piper gets kidnapped. Since there was only 26% of the book left, I felt that part was rushed as well. The test center was very intriguing and I want to know more about it and see what will happen next.

I have never read a story where the main character was a mutant or one that had mermaid qualities. I am looking forward to book two to see where Piper will end up next!