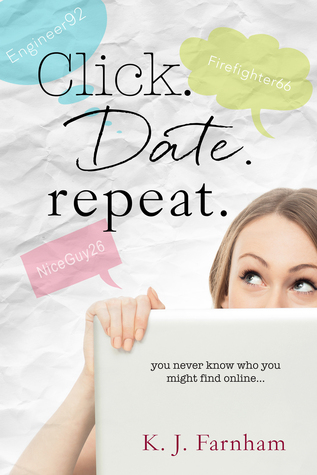 These days, finding love online is as commonplace as ordering that coveted sweater. But back in 2003, the whole concept of internet dating was still quite new, with a stigma attached to it that meant those who were willing to test the waters faced a fair amount of skepticism from friends and family. Such is the case for Chloe Thompson, a restless 20-something tired of the typical dating scene and curious about what she might find inside her parents’ computer. With two serious but failed relationships behind her, Chloe isn’t even entirely sure what she’s looking for. She just knows that whatever it is, she wants to find it. Based loosely on author K. J. Farnham’s real-life online dating experiences, Chloe’s foray into online dating involves a head-first dive into a world of matches, ice breakers and the occasional offer of dick pics, all while Chloe strives to shake herself of the ex who just refuses to disappear. Will she simultaneously find herself and “the one” online, or will the ever-growing pile of humorous and downright disastrous dates only prove her friends and family right? There’s only one way to find out… Click. Date. Repeat.

“My Final thoughts before falling asleep have to do with what I learned this time around. I can’t change any of it now. The timing just wasn’t right, and you know what they say….. Timing is everything”

K. J. Farnham took us on a journey with online dating through the eyes of Chloe Thompson. I like how down to earth Chloe was. Yes, she had some standards when it came to dating and picking out the guys that she would meet in person, but who wouldn’t? Chloe was able to move past some of these standards, showing how much growth she went through. I also liked how K.J Farnham had some of the other characters show growth, I think that Chloe’s friends learned some things as well. Then there are all the different guys that Chloe met and dated. I have to admit I did like two of the guys a lot and they seemed like such great guys.

The ending was a little bit of a surprise and I wish there was a little more to it. I would love to see where Chloe is now and how she is doing with the man she chose. This story was a great chick lit book which had some really great moments!!