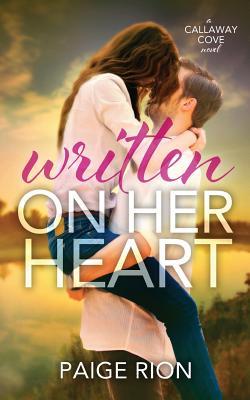 Title- Written on her Heart

Andi Callaway has dreamed of becoming a published author her entire life. Ford Delaney has always wanted nothing more than to escape his past.

An opportunity of a lifetime. This is what Andi finds when she returns home to Callaway Cove on summer break. A chance to work for her literary idol Ford Delaney is up for grabs, and she’s willing to risk everything-her boyfriend, her best friends, and her education-to get it.

She’s positive this will be the key to reaching her dreams. But the moment she begins working for the reclusive author, Andi realizes there’s more to him than just a name. As attraction builds between Andi and Ford, she begins to discover consequences must come hand-in-hand with something great-which could loosen control over her tightly wound life. And once romantic sparks fly, Andi’s other relationships start to crumble, Ford’s fame comes back to haunt him, and the heat they generate will either forge a powerful, enduring love or threaten everything she holds dear.

“Your family and friends are important to you. You wear your heart on your sleeve and you emotions, as well, which is why you are to easy to read.”

I think I enjoyed reading “Written on her Heart so much because I see a lot of myself in Andi, as a character she was so relatable and down to earth. There were somethings that I did not agree with, like her cheating on her boyfriend, but I think since I didn’t feel any connection between her and her boyfriend, it didn’t bother me so much. The connection I felt was between Andi and Ford, and I just wanted her to give into it. I just wished she would have broken up with her boyfriend and not cheated!!!!

Whoa, Andi’s friends were not at all friends to her. First, they never told her about the job she would have like, instead they both went for it on their own. Second, Rachel kept trying to steal Andi’s job from her. Not only was she trying to get the job, but also Ford, even after she sensed that Andi might have feelings for him. Third, this is more about Andi’s boyfriend, but he was such a jerk about not supporting his girlfriend.

I found the fact that the story involved writers was pretty interesting, as a writer Ford intrigued me. I like how h based some stories based on his life and didn’t hide that fact. He also seem to see something in Andi as a writer, at first I kind of thought he was going to steal her story and turn it into his own book.

This was such an easy flowing read that grabbed me from the beginning and before I knew it, I was done reading!!